The salt-preserved wakame is carefully sorted and shipped.

Freshly harvested wakame is delivered to our coastal cultivation farms from winter and spring. On some days, 100 tons is delivered.

Wakame, fresh from the ocean, is immediately sent to the Washing and Sorting Process. It is then salted in a fresh and clean state.

The salted wakame is allowed to rest for a while, after which it is carefully sorted. Workers check for foreign matter while packaging it.

Workers remove the delivered salted wakame one bag at a time, and place it on the processing line while visually inspecting it.

The salted wakame delivered to the factory is first visually inspected for foreign matter. Workers loosen the wakame by hand while placing it on the processing line.

To ensure the safety and trustworthiness of the products we provide to our customers, only products, which have passed strict inspections from the delivery stage on, are sent to the next process.

Our workers perform each step with seriousness and strict attention, and constantly seek to achieve even higher quality.

We also participate in eco-friendly initiatives, such as reusing wakame rejected in the sorting processes for animal feed.

The wakame is sent down the processing line and is then placed into a large rotating sieve where foreign matter is removed. It is then washed several times.

There can be many different kinds of foreign matter, both small and large, attached to marine products farmed in the natural environment.

The wakame is rotated in a large sieve for a long time. During that time, it loosens, and small foreign matter such as sand, salt, small fish, and shrimp are removed.

After the sifting process, the wakame is thoroughly washed with running water. During the three or four washing sessions, foreign matter that sinks or floats is removed.

The dried wakame is processed with various sorter equipment, such as an air current sorter and a color sorter. All foreign matter is carefully removed.

The wakame is dried until the water content is between 6% and 8%. After shrinking to a size of several millimeters, it is sent to the air current separator process.

The wakame passes through various processes including a magnet to remove metal objects, and two sieves with different sized holes. It passes a second time through the air current sorter, and finally through the color sorter to remove foreign matter according to difference in color density.

We perform multiple checks in order to maintain a higher quality. We aim to perform stricter inspections, and pursue safety and security. 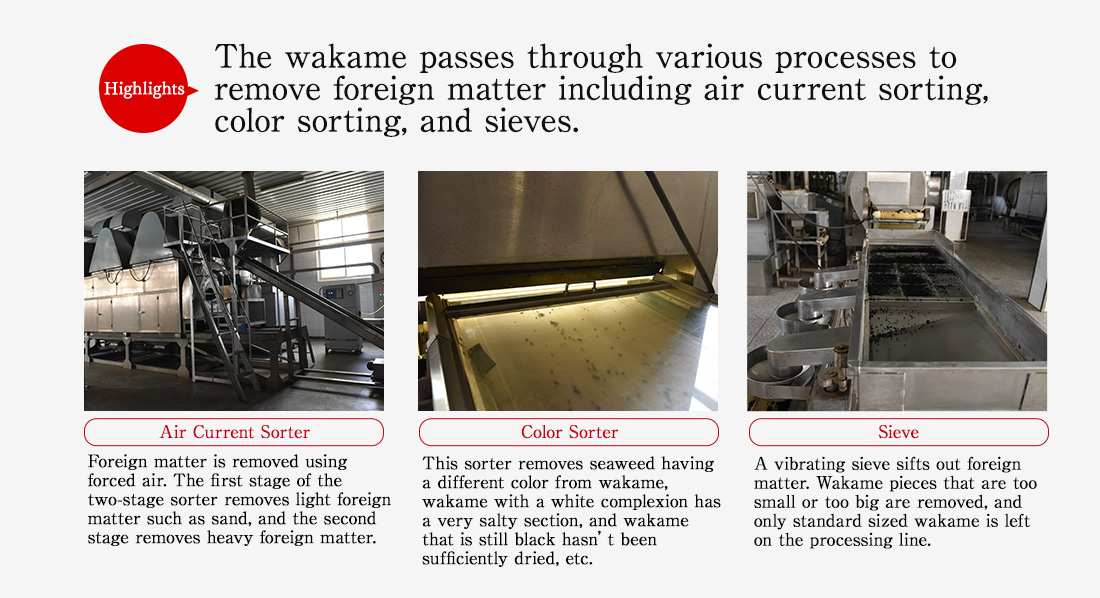 Experienced inspectors check every single piece of dried wakame that passes by an approx. 50 cm wide belt conveyor. Our inspectors visually sort about 3 tons of wakame a day.

The professional inspectors remove any wakame of irregular size or poor color, and also remove any fine foreign matter.

The inspected wakame is placed in bags, and sent to the second visual sorting session.

A total of three visual sorting sessions are held, during which samples are inspected to confirm that the wakame quality is acceptable. 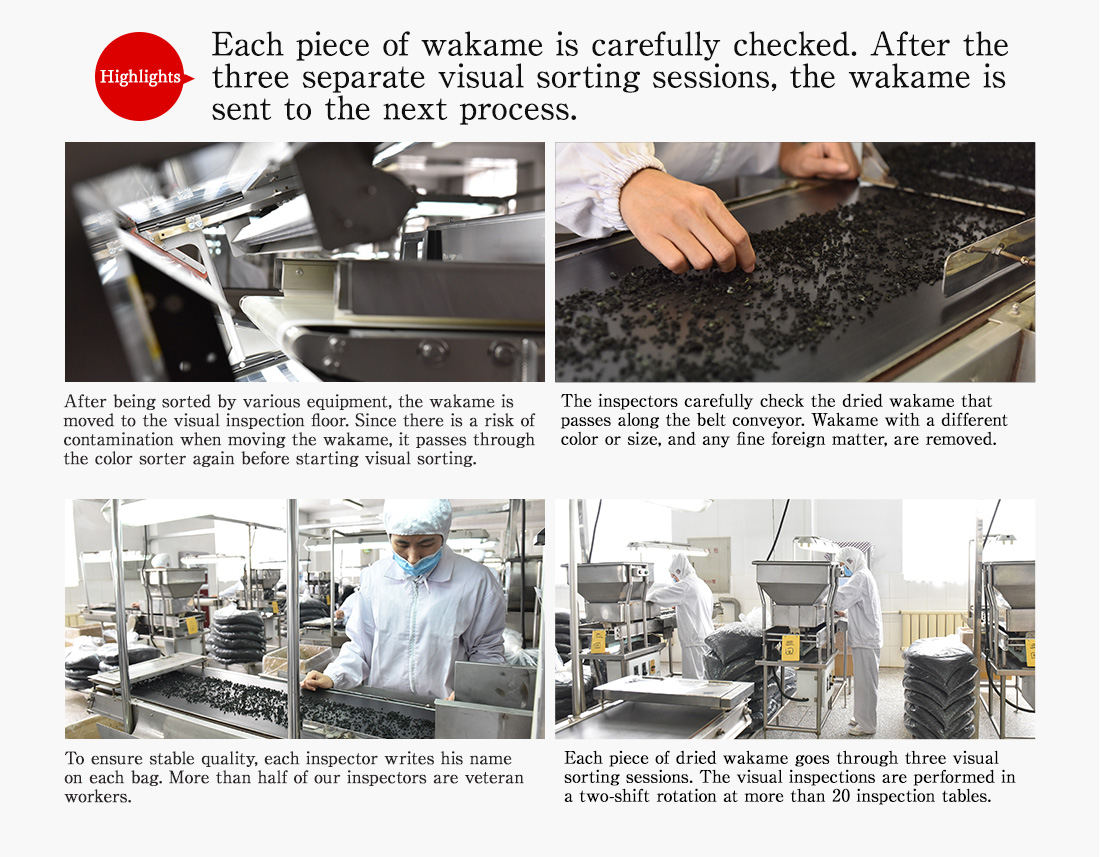 After three visual sorting sessions, the wakame is inspected for foreign matter with inspection equipment.

After the wakame is sorted by human hands and eyes, it is passed through the sieve again.

It is then passed through a three-step inspection consisting of a magnetic inspector, an X-ray foreign matter detector, and a metal detector. After these inspections, the wakame is finally sent to the packaging process.

Measures to prevent foreign matter from contaminating the dried wakame are verified and applied from various angles and methods. 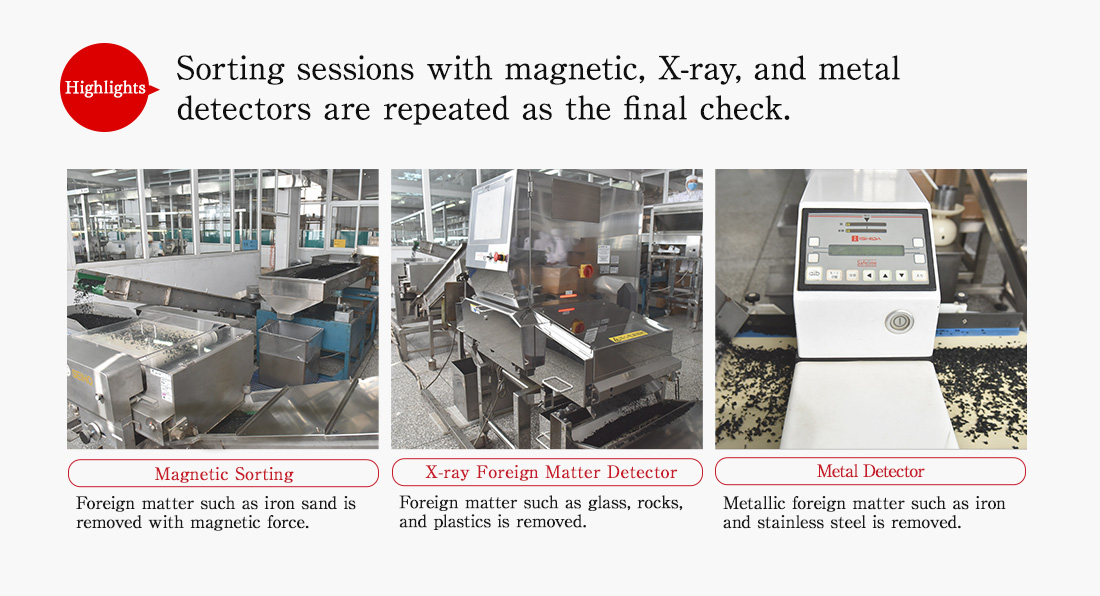 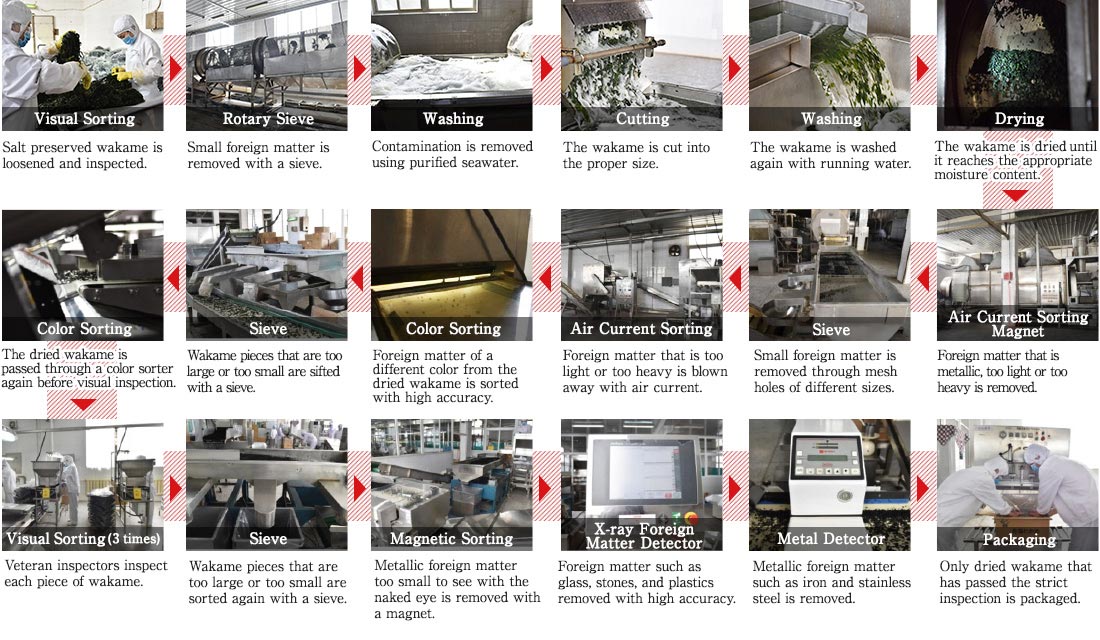 We want our customers to continue loving the Marukome Brand. We strive every day to constantly provide products that are safe and trustworthy.

We hope that our customers recognize that, behind the scenes, many people are involved even in our mass-produced products.